skip to main | skip to sidebar

This a report on a game played at our club during 2008.

This senario is based on one of the few locations where there was effective offensive action by French forces during the initial stages of the German assault. We are using Blitzkrieg Commander (BKC) rules, with the command rules modified so that each command rolls on a CV of 11 for their first activation unless any of the units in the formation have a modifier in which case they roll on their normal CV factor +/- modifiers.

Background to the senario.
While in most areas the French put up a strong but static defence, the combination of limited approaches, an agressive French commander, and the availability of armour support in reasonable strength enabled the local defence at Stonne to be remarkably fluid with the village (and the heights it commanded) changing hands at least 7 times during the 2 1/2 days of the engagement.

The situation is based on one of the French counter-attacks on the second day of the engagement, by this time the piecemeal reinforcements of the German attack were starting to become more organised as the routes through the Ardennes cleared of the massive columns created in the build-up to the initial attack, and more crossing points of the Meuse were either captured or built.

Initial French Deployment.
All begin the game on the Western table edge, the artillery are off table. The infantry are organised into three battalions with the supports split equally among them each with a HQ. The armour are 3 detached companies from the 4DCR with one HQ.

Orders are to take the villages and hold.

These are organised into 3 infantry battalions each with a HQ, and an armoured command with HQ. On table forces are organised however the player wishes, all artillery are off table.

Orders are to ensure that the villages are secure, then push West to support main advance when reinforced.

If and when the remaining forces arrive they enter on the Eastern table edge, under the command of the HQ and must remain under this command for the game. 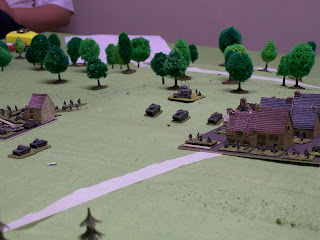 Terrain
Stonne is sited on the plateau of a small but steep and heavily wooded ridge which gives good coverage of the surrounding valley's to the South and West.

All woods to the East and South are steep slopes which are impassable to vehicles except by road, to the West the slopes are less extreme although the wooded areas are impassable to all vehicles. To the North the combination of slopes, woods and poor roads make any largescale movements impractical.

At the start of the game the French player has to designate the target and turns that the artillery assets will arrive, a successful command roll by the FAO (Forward Artillery Observer) can delay or cancel the asset but not change the target.

The French elect to make their major attack down the principle road into Stonne with all their armour and 2 infantry battalions, while the third covers the open ground on their left flank, and in the first few turns make a rapid advance to the extent that there are concerns they might have to cancel the initial artillery bombardments because they would be too close to their targets.

This fear is quickly dispelled when they reach the small farm hamlets at the top of the slope, here a few poor command rolls and the restricted terrain slows the advance, and some accurate German fire brings it to a halt in a huge traffic jam. 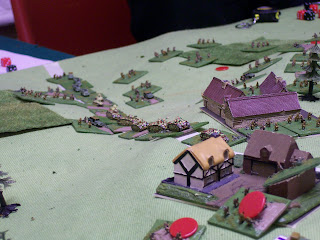 At this point the German reinforcements begin arriving and both sides spend the next couple of turns exchanging long range fire while reorganising themselves. An attempted advance by French infantry through the edge of the woods on the right flank was quickly blocked and then repulsed. 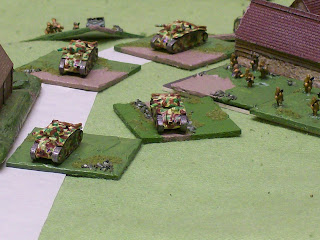 h armour manage to work their way through the hamlets, just in time to meet a German armoured counterattack, however a poor German command roll followed by some good French ones saw the multiple anti-tank guns and 47mm Char B1 turret guns destroying or driving off the attack with ease. 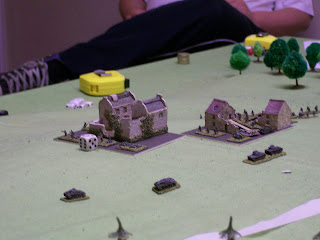 Before the French could take advantage of the failure of the panzer attack the Germans finally managed to get an effective attack with their artillery supported by stuka's which although it failed to destroy any of the Char B1's did suppress the front company and most of the infantry in the area.

By this time the additional German infantry and remaining armour with artillery and air support convinced the French commander that there was insufficient time to clear the way for enough of the armour to be able to take the villages before nightfall (Game Turn 12).

Summary.
An interesting game with a lot of potential, there are a number of senarios based around this engagment giving the possibility of using it as a mini-campaign.

Despite the German command and control advantage the French were able to put together an effective attack, their major problem was in commiting to a very narrow frontage which was just within range of the German anti-tank weapons, and more importantly clearly visible to the German FAO/FAC.

Historicaly it shows that if the French high command had left the armoured formations under their own commanders authority rather than splitting them up under old style infantry commanders, the German panzers might have had a harder time of things, although given the relative organisations, tactics, and equipment the end result would probably been much the same, just taken longer and given the French army of 1940 a little more respect.
Posted by Chris at 06:23

Forthcoming and Past Events / Games